Ukraine Airlifts Its Entire Gold Hoard To The U.S. Fed? 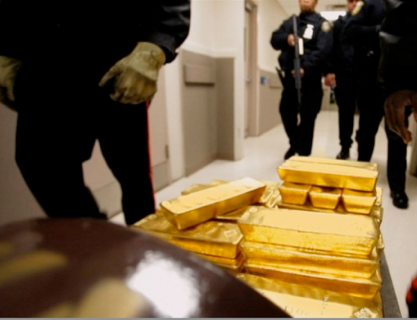 Always a pot of gold at the end of the rainbow of regime change when the U.S. is involved!


An outspoken hedge fund manager out of Hong Kong stunned King World News when he said that the entire Ukrainian gold hoard may have just secretly been flown from Ukraine to the United States.  William Kaye, who 25 years ago worked for Goldman Sachs in mergers and acquisitions, also spoke about the incredible implications of this astonishing development.  Below is what Kaye had to say in this powerful interview.

Kaye:  “There are now reports coming from Ukraine that all of the Ukrainian gold has been airlifted, at 2 AM Ukrainian time, out of the main airport, Boryspil Airport, in Kiev, and is being flown to New York -- the presumable destination being the New York Fed....


“Now that’s 33 tons of gold which is worth somewhere between $1.5 billion - $2 billion.  That would amount to a very nice down payment to the $5 billion that Assistant Secretary of State Victoria Nuland boasted that the United States has already spent in their efforts to destabilize Ukraine, and put in place their own unelected  government.”

Eric King:  “Whether the United States is taking down Saddam Hussein in Iraq, or Muammar Gaddafi in Libya, there always seems to be gold at the end of the rainbow, which the U.S. then appropriates.”

Kaye:  “That’s a good point, Eric.  The United States installed a former banker in Ukraine who is very friendly to the West.  He is also a guy with central bank experience.  This would have been his first major decision to transport that gold out of Ukraine to the United States.

Even the Bundesbank has admitted that the gold sent to them by the New York Fed had to be melted down and tested for purity because it wasn’t Germany’s original bars.  So how is it, since logistical requirements are supposedly such a major issue, that in one airlift, assuming this report is accurate, all the gold Ukraine possessed in their vault was taken out of Ukraine and delivered to the New York Fed?

I think anybody with any active brain cells knows that just like Germany, Ukraine will have to wait a very long time, and very likely will never see that gold again.  Meaning, that gold is gone.”

Whistleblowers used to be called journalists

Julian Assange and the WikiLeaks organization are being treated as a threat instead of what they are: a journalist and a media organization that are exercising their fundamental right to receive and impart information in its original form, free from omission and censorship, free from partisan interests, free from economic or political pressure.